Here at Garvin’s we’ve been serving Denver and the front range with drain cleaning for over 75 years, and have seen business grow ever since. One big reasons for the growth is, of course, the growth of Denver. Another reason, the one we’re most proud of, is that we gain business by word of mouth as people use our services and then tell their friends and neighbors.

But we started wondering…when you account for those two things, do people need as much sewer cleaning as the used to? Or are they using less per household Here are some arguments both ways when you ask the question “do people need a drain company more than they used to?”

No: Better Pipes — Maybe people don’t need sewer cleaning as much because of better pipes. Pipes used to be made of clay or concrete (which disintegrates over time), then moved on to cast iron (which rusts). Since the 1970’s most sewer pipes have been made from PVC plastic, which holds up to the sewage from within and the dirt and water from outside. It also holds up well to the scraping from rooter service, and fewer breaks mean fewer places for tree roots to get in.

Yes: People Eat More Grease — We often think of the people of the past eating less healthy. But before World War II people actually ate considerably less meat; they just couldn’t afford it and it wasn’t being produced on such a large scale. And when they did eat bacon, they saved the grease to use later to fry food because they didn’t have vegetable oil. Since they were reusing the grease, they weren’t letting any of that precious commodity go down the drain.

Today, people are eating oily and greasy foods constantly (we’re looking at you, pepperoni pizza). Meat is included with every meal and cheese (which has a whole lot of fat) is everywhere. At the same time…

No: We Have More Information — We’ve been telling people for years to not send grease down the drain, and it seems that the word is finally getting through. Environmental agencies and cities’ public works departments have been helping us get the word out, and it does seem to be reducing the amount of grease coming through each house, though the increase in population here in Denver can still cause a lot of grease problems.

Yes: More drains — Think about a house built in the 1920’s: one bathroom with a sink and a tub, and one kitchen sink. That’s a total of three drains.

Now take a look at the houses of today: Three and a half bathrooms, a kitchen sink with garbage disposal and dishwasher, and a washing machine. There might be a second kitchen or wet bar, there might be a sink in the garage. All to say that there are more drains than ever that might need a drain company to intervene.

No: We Have Better Machines: Rooter service has been around for decades, but that doesn’t mean that the technology has stopped. We have more powerful machines that are smaller than ever before. We have roto rooters and sewer jetters to clean the pipes cleaner, leading to less frequent visits from a sewer company.

So, what’s the final verdict? Well, not mathematicians, but we do know that that’s a whole lot of variables to account for. The fact is, it doesn’t matter…because all that matters is if you need sewer cleaning right now! When that happens, give Garvin’s a call and we’ll be there to provide the best sewer drain cleaning around. 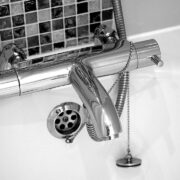 What are the Most Cost-Effective Plumbing Upgrades?

Just What Does “We Clean Drains, Not Bank Accounts” Mean?

To flush or not to flush: How will it affect my need for drain cleaning?

Just call 303-571-5114 or fill out the form below.
What’s Going On With My Dishwasher Drain? Different Types of Pipes We Have To Know As A Drain Company
Garvin's Sewer Service Covid-19 ResponseRead more here
Scroll to top