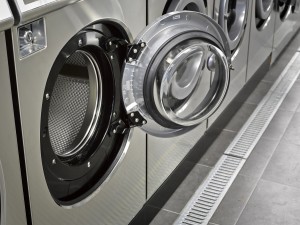 If you’re a laundromat, you’re going to need a professional drain cleaning service sooner rather than later. After all, your business runs on water and the process of removing dirt from clothes…and all of that dirt and grime has to go somewhere!

With all that water moving through the drains and sewer lines, you might think that the drains of a laundromat are constantly being cleaned out. That would be true if you were dealing with only water, but there are so many things that people put into your machines that you just can’t control.

You can’t pick the soap: If you’ve ever cleaned out a shower drain, you realize that the stuff that doesn’t go down later just starts to collect in the drain. It can be much the same with soap…they’re not all created equally, and they don’t all degrade as much as you’d think they would. Plus, people often use more soap than they need to.

Grease: Usually when we’re talking about grease here at Garvin’s Sewer Service, we’re referencing the stuff that people send down their kitchen sinks. But in this case, you’ve probably seen mechanics who come in just to wash their greasy clothes. They don’t want it to affect their own plumbing, so they come in and gunk up yours as the soap breaks down the grease just enough to send it partway down the drain. But when it clings to the sides of your pipes, it’s not going anywhere until you have a professional drain and sewer cleaning service stop by. Because when the grease is there, it just starts grabbing everything else. For instance…

Clothes are constantly disintegrating: Lint traps are in dryers for a good reason, but they’re only catching the clothes particles that are created as the clothes are dried. Before clothes reach the dryer, they’re falling apart (slowly and over the years) in the washer, and all of that clothes matter is being sent down the drains with the water. Of course, it’s not always going to be getting too far, as it will be getting caught on all the hair that’s gone before it.

Hair: Clothing is full of hair. Arm hair, chest hair, head hair dog hair!. While much of the hair that people lose falls to the ground, some clothing material (like fleece and flannel) actively mines it and keeps it. This hair comes out in the wash and hopefully gets all the way to the sewers. Well, it does if you’re actively taking care of your drain with a drain cleaning service. If it doesn’t go down and gets trapped on the grease, it’s going to start collecting even more hair, as well as the other stuff people leave in their pockets.

Pocket stuff: Jewelry, nails (the metal kind), nails (the press-on kind), chapstick, screws, rocks…most of this stuff is large enough where it doesn’t get to the drain and just stays in your washing machine tubs. But if it’s small enough to get into the drain, it’s probably going to get snagged by the grease / hair mixture mentioned above.

The best way to handle this is with Garvin’s preventive maintenance program. And if you need some drain cleaning right away, give us a call and we’ll get your drains flowing again.

4 Signs That You Might Be Needing Sewer Cleaning Soon
A Bit Of Bragging About Our Top-Rated Sewer Drain Cleaning Business
Why do I always need sewer repair during the holidays?
Breaking Down The Declaration Of Service For Our Drain and Sewer Cleaning Customers
Things That Even Sewer Cleaning Can’t Prevent
Toy in the Toilet might mean drain cleaning
4 Reasons People Call Garvin’s For Rooter Service
The Worst Trees That Require You To Get Repeated Rooter Service

Just call 303-571-5114 or fill out the form below.
When You Need A Sewer Inspection With Our Sewer Scope Sewer Cleaners For Car Lots and Garages
Garvin's Sewer Service Covid-19 ResponseRead more here
Scroll to top