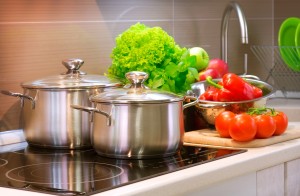 Whether they’re trying to do their own drain cleaning or simply pouring off the water from pasta, we have gotten the same question over and over: is it okay to pour boiling hot water down the sink?

Good question, and the answer is: not really, and we wouldn’t advise it. Why?

It’s not good for most pipes

If you have PVC pipes under your sink (as most of us do), it has to hold up to at least 140-degrees Fahrenheit. But it’s certainly not rated to handle the the 212-degree temperature of boiling water (well, 203-degrees here in Denver because of how high we are above sea level). The glue at the joints are even more susceptible, And even if you’ve sent boiling water down before and noticed no ill effects, know that the damage could be cumulative.

Sure, you deal with boiling water when you cook, but most of the time (like with potsticker or corn on the cob) you’re taking the food out and letting the water cool in the stove. If you’re trying to move boiling water over to the sink, you’re taking one more risk of injury in the form of a scalding or a steam burn.

Never do it in a porcelain sink: If you have a porcelain sink, you run the risk of cracking it if you pour boiling water in it. Porcelain (be it a sink or toilet) can’t hold up to such temperatures.

Like we’ve mentioned before, any grease that’s gone down the drain slides down and sticks to the sides of the drain. Then a little more collects until hot water melts it and sends it a little lower. There’s a point, though, where all of the hot water is going to cool before it gets to the grease clog, and that’s exactly where it’s going to stay. So now instead of having a clog that’s just a little ways down your sink, you’ve got one that’s deep inside your home. That’s where it’s going to stay until until a mechanical drain cleaner goes down there to scrape it off and push it along.

It’s not going to do anything for sewer problems

Some of the time your problems are definitely drain related, but sometimes it’s your sewer that needs serviced because of tree roots that have gotten into your sewer line and the disgusting debris that they collect. Not only will the boiling water cool before it gets there, it wouldn’t do any good even if it were there! If all of your drains are running slower than they should, it’s time for rooter service from Garvin’s.

The Different Types of Water Coming Into And Leaving Your Home
How Rooter Service Heals Your Home
Happy New Years! Make a Resolution To Take Care of Your Plumbing
Are you sabotaging your sewer system in a way that will require sewer repair?
Buying A Pre-existing Home? Make Sure You Let The Professionals Take Care Of Your Sewer Inspection
What’s Going On With My Dishwasher Drain?
"Your Sewer Scope Saved Us Over $8500!"
You’ve Got A Clogged Kitchen Sink... How Bad Can It Be?
1 reply

Let us know how we can help by filling out the form below. Need a quote right away? Give us a call 303-571-5114!
Renovating An Apartment Complex? Don’t Forget About the Commercial Drain and... The Importance of Proper Drain Cleaning Service When You Own A Restaurant
Garvin's Sewer Service Covid-19 ResponseRead more here
Scroll to top