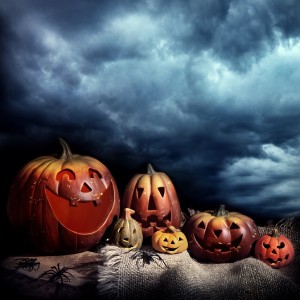 Happy Halloween! Whether you celebrate the holiday with hundreds of decorations or you turn your lights off so no one stops by, you can’t deny that there’s something appealing about spooky tales. So we’ve scoured the web (when we usually scour drains) to find some of the weirder things that people have found in their toilets over the years. People have found some strange things in the toilets, no doubt. Read at your own risk!

Sharks and fishes and hogs heads, oh my!: Rest assured that these things didn’t get there on their own by swimming up the drain (or whatever it is that hogsheads do…do hogsheads swim?). All of these were left behind by people (most often in public bathrooms) as a practical joke to frighten the next user. Which brings up a good point: look before you sit down! Speaking of which…

Snakes: Most snakes are small and thin and can get into just about any space. So when it gets to be winter outside, they’ll do their best to get into a warm place in your home, whether it’s the garage or the bathroom. Most of the snakes you’ll find around here are garter snakes, so you don’t have much to worry about. If you live on the foothills or in the mountains, though, watch out for rattlesnakes! (Again, look before you sit!)

Spiders: Most of us have found at least one spider hanging out in our toilet bowl. While spiders do drink water, it’s much more likely that you noticed it there because it was a dark spider on a white background, and that you simply didn’t see it when it was on the side of the vanity. (If you want to be really freaked out, don’t think about the white spider on your toilet…Boo!) This is one of the few things here that you can flush, though if you have a soft spot for spiders, we’re sure you can find some way to get him out. Spiders also tend to end up in basement showers as well, but are considerably harder to wash down the drain.

A Small Opossum: Okay, this little guy was actually pretty cute. A woman in Winnepeg, Canada found a possum in her toilet and promptly called animal control. (Good choice! In this case, thank you for not calling us!) Since it couldn’t come from the fresh water and was gasping for air, it became obvious that it had swum up the sewer line.

Ghosts: Has anyone actually ever found a ghost in the toilet? Probably not. Why would a ghost hang out there, anyway? But when you Google “ghost in toilet” there are some freaky images that will make you avoid the bathroom until New Years!

The Value of Business Networking in the sewer cleaning industry

Do People Need A Drain Company More Or Less Than They Used To?

Bathrooms (and drain cleaning) of the Future

You Can’t Learn Everything From About Drain Cleaning From The Clog Blog, So Like Us On Facebook!

Just call 303-571-5114 or fill out the form below.
Top 3 Advantages Of Using Our Mechanical Rooter Service For Your Sewer Drain... 3 Things That Can Go Wrong With Drain Cleaning Chemicals
Garvin's Sewer Service Covid-19 ResponseRead more here
Scroll to top