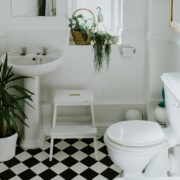 We hope you had a restful Labor Day! Perhaps you even went camping? There’s nothing like a fun stint in the woods with family and friends to celebrate the holiday.

Until you encounter a pit toilet or a “Luggable Loo” and then, suddenly, you really appreciate home and… plumbing.

In honor of this time of year when we take a rest from toil, let’s quickly survey the history of one of our most incredible labor-saving systems—modern plumbing.

Before we begin, if you play Scrabble, take notes. The story of plumbing is full of cool words that might just pump up your score.

Ancient Iranians or Persians built Qanats or Kariz to supply their communities with fresh water. Qanats were constructed of vertical channels dug from the surface of hillsides deep into the earth and connected to a horizontal channel engineered to carry water where it was most needed. The Persians connected the qanats to Ab Abnars or big, tower-like cisterns to hold water. Many quanats are still in use today.

Ancient Iranians understood that removing waste water from their communities helped their people to thrive. They conceived systems for sanitation in the city of Zabol which is on the border of modern Afghanistan.

The Chinese are known for inventing paper and noodles. But, few people know that the Chinese dug deep, complicated wells for drinking water up to 7000 years ago!

The ancient Chinese not only knew how to establish long-lasting sources of water, they knew they needed to take care of them. The I-Ching, an important Chinese text written in 1000 BCE, advises readers how to maintain and protect sources of drinking water. Archaeologists found evidence of plumbing from the first imperial dynasty which dates to 221 BCE.

Modern-day Pakistan and Northern India comprised the Indus Valley in ancient times. In the city of Lothal in the valley, people had their own indoor covered toilets which were routinely emptied and cleaned as early as 2350 BCE. Nearby cities contained bath houses which were emptied into pipes that flowed into common drains.

In what is now Pakistan, houses drew water from wells and drained waste water into covered drains in the street.

Travel to Knossos today on the Island of Crete and you can still see the ruins of the ancient Minoan civilization. The paintings etched on the walls there look slightly Egyptian and their colors are still vivid.  Minoans were some of the first people to use underground clay pipes for carrying and eliminating waste water. Later, Cretans engineered some of the first flush toilets on Earth.

A Greek inventor named Heron invented a system in 62 ACE to put water under pressure and use it to fight fires in Alexandria, Greece, a city of over 5 million people desperately in need of such ingenuity.

The ancient Romans built an incredible system for sanitation called the Cloaca Maxima which drained overflow water around Rome into the Tiber River. They built public toilets (from photos, they look like stone, open-air pit toilets) over the Cloaca Maxima and the sewage was carried away by the river.

The Romans also developed a huge, intricate system of aqua ducts that carried water into the city from the nearby mountains. Parts of the aqua ducts and associated piping were constructed from clay, stone and lead. In fact, our modern word “plumbing” comes from the Latin word for “lead,” plumbum.

During the Middle Ages, cleanliness rituals were often tied to religious or philosophical practices. In Nepal, constructing a drinking fountain for others to use was considered a virtuous act. The Nepalese built a drinking water system made of hiti, or stone fountains that funneled water from deep underground sources, as early as 550 ACE.

As far back as the 7th century, Islamic purity practices required ritual washing and bathing which fostered an entire industry to build bath houses throughout nations that practiced Islam.

Europeans in the Middle Ages were not as concerned with cleanliness or hygiene. Waste water sometimes ran in open channels down the middle of streets. This lack of fastidiousness and poor sanitation led to the spread of the Black Plague. The first closed European sewer wasn’t constructed until 1370 ACE.

In the 16th century, Sir John Harington of England invented his version of the flush toilet for Queen Elizabeth I and waste from the device sluiced into a cesspool. Lucky Sir John—many people in the English speaking world still refer to him when Mother Nature calls.

By the year 1535, politicians began to enact legislation in England to keep the central river in London, the Thames, free of waste. The legislation was ignored and construction of an actual sewer system didn’t begin until the mid-to late-1800’s, meanwhile cholera ravaged London in a series of epidemics.

By the end of the 19th century, many large cities in Europe and the U.S. established underground sewer systems. Studies in the UK and Germany led to an understanding that disease could be transmitted by contaminated water and eliminated by water treatment and filtration.

Today modern water and sewage pipes are made not from wood, stone and lead, but of steel, copper and plastic. The modern materials are more durable and easier to install than their ancient counterparts.

Galvanized steel pipe can last up to 50 years though it can sometimes corrode. Copper pipe is clean and efficient, but extremely expensive today. Plastic piping comes in seven different varieties for various uses from PVC to PEX-AI-PEX which contains a layer of aluminum between layers of plastic.

At Garvins, we care about you, your water and your sewer system. We do sewer cleaning, drain cleaning, sewer camera inspection and preventative maintenance. Contact us today for a Speedy Fast Quote or call us anytime.

Just call 303-571-5114 or fill out the form below.
Love your plumbing and your sewer line and they will love you back