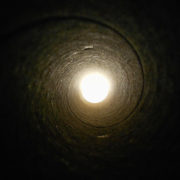 Plumbers have been around for as long as plumbing has existed, making it one of the oldest professions in the modern world. Despite that, plumbing has a come a long way, especially in the last few years as technological advancements have helped make it easier than ever to detect any issues in hard-to-see locations such as your sewer line. Here at Garvin’s Sewer Service, we sometimes use sewer inspection cameras to locate sewer line problems, but only in certain situations.

If you’ve ever wondered in what contexts we may need to use these special cameras, the following explains how they work and what they can detect.

The device itself features a box with a screen attached a thin, snakelike hose that can be deposited into an open drain. Inside the hose are small lights and a fiber optic camera similar in size to those found in smartphones, and as the camera at the end of the cable extends down the pipe, images of what the camera sees shows up on the screen in real time. As the plumber threads the cable through the pipes, it observes any potential obstructions or leaks.

What These Cameras Can Show Us

Perhaps most importantly, these cameras have made it possible for us to detect problems that may be located in a sewer line, which is buried underground and often inaccessible for visual inspection from the outside. In a nutshell, these cameras can show our professionals most cracks, root damage, and corrosion, giving us an easy look at what needs to be fixed and how we could best approach fixing it.

For example, the camera could determine that root damage is what’s causing the issue, so we would know how to use the right kinds of tools to correct the issue. If there’s a clog, we know how to flush it out. There’s a good reason we use these so much at our jobs!

What Cameras Can’t Do

While a sewer camera inspection can catch many problems, there are some things it can’t do. With some old cast iron piping, the image can be hard to interpret sometimes, at which point we may have to use other diagnostic methods to figure out what’s going on.

At the end of the day, though, these cameras are very helpful in diagnosing what’s wrong with a sewer line. They help Garvin’s Sewer Service professionals do their job in a way that allows us to complete jobs quickly and efficiently. These types of modern plumbing tools are good for everybody involved, so don’t be surprised if you see one of our technicians using a sewer camera the next time you call them to your house to correct a sewer line issue.