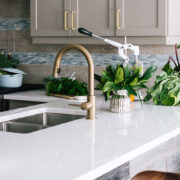 The main character, Dragonbreath (who’s a dragon, not a sewer snake), is a young dragon who goes on all sorts of adventures, most of which are a short bus ride to locations all over the world (yep, you read that right). He’s featured in books with titles like Attack of the Ninja Frogs, Curse of the Were-Wiener, Revenge of the Horned Bunnies, and Nightmare of the Iguana. But the one we want to talk about is The Case of the Toxic Mutants, in which Dragonbreath heads toward that place we’re all familiar with, the sewer!

We’ll, you might be familiar with the sewer all that much, but we know it pretty well. And we like that particular book because of the grease monster that lives there (made up of a lot of potato shavings for some reason). Now, when most people hear “grease monster” they think about the huge clogs that city sanitation workers find deep in the sewers from years of people sending grease down their drains. But this grease monster is actually quite friendly, and for some reason has a symbiotic relationship with the rats of the sewer who continuously bring him pieces of food to sustain him.

So why are we telling you all of this? Well, it’s a good read if you have kids. But we also want to remind you that grease monsters are not friendly! Real grease monsters clog up public works and make it difficult for the stuff you get rid of to get as far away from your house as possible. Always put your grease in the trash, not the sink…doing this is the simplest way to prevent a premature need for drain cleaning. Avoid the grease monster and avoid drain cleaning service!

Would You Like To Be A Plumber Or A Sewer Drain Cleaning Service Expert?
Dumping Oil In Your Sink Leads To Unnecessary Drain Cleaning! Here are some turkey fryer oil drop-off locations in Colorado
4 Signs That You Might Be Needing Sewer Cleaning Soon
Stuff Women Need to Know About Preventing The Need for sewer service
Dear Garvin's Sewer Service
Why To Call Us For Your Sewer Snake Drain Cleaning?
A Good Reputation In Sewer Repair
How bacon grease down the drain can lead to you needing sewer cleaning

Let us know how we can help by filling out the form below. Need a quote right away? Give us a call 303-571-5114!
Famous Sewers From Hollywood 4 Signs That You Might Be Needing Sewer Cleaning Soon
Garvin's Sewer Service Covid-19 ResponseRead more here
Scroll to top