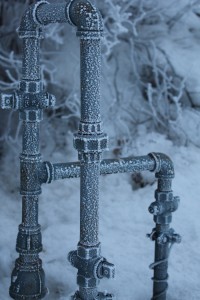 Because we live in a part of the country that has seasons, it got us thinking about how these seasons affects the way we do our job, and how it affects our business.

The Cold Sewer Pipe: While grease in cold pipes isn’t going to go rancid as quickly, any grease that goes down the drain is going to cool faster in winter, which is going to cause it to glob up and start collecting other stuff.

Cold Fresh Water Pipes: Frozen pipes — those that break when someone turns the thermostat down too low and goes away for a week — are certainly one of the most common water mishaps that occur. The key is to turn your thermostat down so that you save money, but not so low that your pipes freeze. Unfortunately there’s not a magic thermostat number, as everyone’s pipes are in different locations and insulated to different degrees.

Pipes underground won’t freeze: Here’s the good thing about pipes…if they’re far enough underground, they don’t freeze. This is true of both freshwater and sewer pipes. That’s because the ground keeps a constant temperature of about 50-55 degrees fahrenheit (This is the same principle that allows geothermal heat pumps to work.) So these pipes aren’t really causing us additional problems in winter.

As it turns out, it’s not so much the weather that changes things during the winter…it’s the holidays! People are deep frying turkeys, making gravy, and taxing their plumbing systems with tons of holiday guests. When this happens, it can certainly lead to an uptick in our business.

Things That Even Sewer Cleaning Can’t Prevent
When Your Car Wash Needs Commercial Drain Cleaning, Give Garvin’s Sewer Service A Call!
Why So Many Drain Cleaning Calls On Monday?
The Different Types of Water Coming Into And Leaving Your Home
Is It Okay To Pour Boiling Water Down My Pipes In Order To Do My Own Drain Cleaning?
Roots In The Sewer Line? It’s Just The Beginning of Your Problem
What Do People Do With Grease?
If You Manage Hotels and Motels In Denver, Drain Cleaning Should Be A Top Priority

Let us know how we can help by filling out the form below. Need a quote right away? Give us a call 303-571-5114!
Watching Out For The Environment: Rooter Service Is The Way To Go It’s A Trap! The Importance Of Grease Traps In Commercial Drain Cleaning
Garvin's Sewer Service Covid-19 ResponseRead more here
Scroll to top