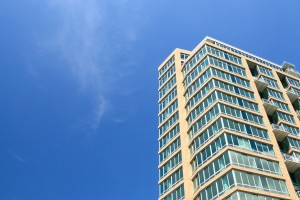 Whether you’re a contractor working on an apartment complex, an owner who is looking to flip an apartment, or are renovating after many years on an old apartment, there’s one invisible aspect of the renovation that you certainly don’t want to ignore, and that’s drain cleaning and sewer cleaning for every apartment you’ve got.

You might wonder, why is it so important to get every single drain cleaned, including each sink, kitchen, and toilet? Glad you asked. When a renter doesn’t own an apartment, they’re just not going to take as good a care of it as they would if they owned the place. Many people send stuff

down the drain and don’t give it a second thought, thinking that “I’ll be moved out of here before anything goes wrong” or “if it clogs, I’ll let the super deal with it.” They’d think differently if they were the ones who had to clean the mess, but they’re not. You’re the one who has to deal with the drain cleaning here in Denver.

Kitchen sinks: One of the biggest offenders in an apartment complex is the kitchen sink. That’s because people don’t think twice about sending grease down the drain. Most people subscribe to the “out-of-sight, out-of-mind” idea and they think that the grease is gone for good. Well, because grease cools so quickly, it didn’t go far. Sure, it might make it a foot down the drain, and then another foot the next time they send boiling water down the drain.

But eventually it’s going to be at a distance where all of the water cools in the pipes before it reaches the grease, and that’s when the bad stuff really starts to happen. It starts picking up everything that passes by, including those potato peels that they thought were a good idea to send down the drain. Eventually (maybe with your next very dissatisfied tenant) it’s going to back up and cause a problem for everyone.

If the new tenant knows that it wasn’t their fault, it’s likely they’re not going to think much of your plumbing system. All of this could have been fixed with preemptive sewer cleaning and drain cleaning from Garvin’s Sewer Service.

Showers and Tubs: If your next tenant moves in (the one after the renovation) and they’re taking a shower, they don’t want to be standing in the shower two weeks later and have it back up on them. At that point, it’s pretty obvious that their hair hasn’t had enough time to back up, so it must be the hair from the previous occupant…and that just makes you look like you don’t care about what goes on in the drains.

All of these problems can be fixed with the right sewer and drain cleaning. You owe it to yourself to be able to keep your next renters and keep the turnover low. Give Garvin’s Sewer Service a call and we’ll take care of every drain you manage.

The Sewer Snake: 7 Benefits To Having A Professional Take Care Of It

How much does a sewer scope inspection cost?

When You Need A Sewer Inspection With Our Sewer Scope

Too good to be true?

Sewer Jetters Aren't for everyone

Let us know how we can help by filling out the form below. Need a quote right away? Give us a call 303-571-5114!
Happy Holidays and Merry Christmas! Have Us On Speed Dial If You Need Emergency... Is It Okay To Pour Boiling Water Down My Pipes In Order To Do My Own Drain ...
Garvin's Sewer Service Covid-19 ResponseRead more here
Scroll to top